Galen Waling is a busy musician with a lot of active projects. Best known for his collaborations with PIG, Lords of Acid, and En Esch, When Covid struck, like many musicians, Galen found himself in the midst of intense projects, tour plans, and recording.

“I was in LA rehearsing for the Make Acid Great Again tour with Lords of Acid. Everyone had flown in, rehearsals were going great, merch was ordered and ready to pick up, bus was on its way…..and a day before our first show, which started in LA, we got the notification from Live Nation they were cancelling all tours for the rest of the year due to COVID-19,” Galen said via email. “Everyone was just in shock for a while after that.”

While most artists are focusing on their online platforms in response to cancelled shows, Galen has changed his approach to reaching fans and collaborating with other artists as well. He says he has been focusing on his online merch store (https://galenwaling.square.site) and pushing shirts and signed gear.

“I’ve also started a Patreon page (www.patreon.com/galenwaling) to connect with die-hard fans on a more personal level, “ he says. “I’ve also been doing a lot of remote recording sessions from my home studio, and trying to post lots of drum videos on my social networking sites.”

Through Patreon, supporters can even subscribe to a rewards level that allows them to personally work with Waling on their own music projects. An up-and-coming musician can send him an original track to which he will add his spin on it. Or take personal lessons with him. Not only is Galen a top industry musician in the industrial scene, but Galen is a classically trained musician who has been playing drums since the age of three.

“A lot of us are out of work until the entertainment industry resumes,” he says, expressing the frustration of lack of resources for independent contractors like himself. Adapting to the changing times has been the only option.

“In the meantime, musicians are trying to support one another by promoting each other’s music any way we can.” He assed that Bandcamp Friday’s have been very helpful for a lot of musicians.” This is where Bandcamp has offered all proceeds from the platform’s sales go directly to the artist without taking a cut.

Waling says it’s hard to say how much the industry will change from all of this, pointing out that lots of venues have closed their doors for good or are facing that reality in the near future. “Kind of hard to play live music without venues,” Galen jokes. “I’m sure it will also affect income in all sorts of ways for touring bands once touring resumes.” and adds that in some ways, this has also forced musicians to become even more creative while working in isolated conditions. 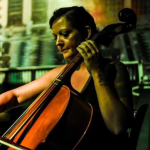