“Let’s not fight, let’s unite! We are birds of a feather, let’s stick together.”

The Sounds Of Honor

It is no secret that music is sorcery. Music can alchemize your mood and your senses just like a Shaman can weave the Energies oscillating around the room. It’s no secret that the Mastery of creating and performing music is as much of a Martial Discipline as Kung-Fu, Zen, and Tai-Chi are. Creating renowned Music which guides, inspires, and drives Men and Women to be honorable members of the Cosmos is at once: influentially complex and timelessly simple! It’s not only about the practice and cumulative expertise of sowing the essences, it’s about meticulously crafting the brilliance, and reaping the creation when it’s ready to be reverberated back into the Cosmic ripple pool of Infinity; and, so there it resonates…for Millions and Billions and Future TRILLIONS of sentient life to be Blessed by it!

The Code Of The Singing Samurai

There’s a familiarized pattern that I see amongst many Legendary Musicians; I refer to them with the sincerest term of endearment that I could think of: “OG”. “OG” is an acronym for: Original Gangster, simultaneously I cognize it as: “Samurai.”  What does the word “Samurai” mean to/for me? If I may quote the Great Desmond Dekker from His song, ‘Fu Man Chu’, “it is not what you earn that make you a man, but it is what you KEEP that make you a man…” What should a man keep? Money, fame, and power? Or, perhaps Love for His fellow Human?! Perhaps a Man should keep the generational sagacity of how to transcend and transmogrify out of any hellish landscape that He and His kind may find themselves in. So, what makes a man a Samurai? What makes a Musician an OG?

Many Mystics claim that the Universe is simply sound. Certain sounds go better with certain landscapes. Some may say that we are in a hellish landscape. We are in unprecedented times! We’ve been in unprecedented times before! We will be in unprecedented times again! We are seeking solace anywhere that we can find it; while a small noble faction of Men and Women are not only attempting to find solace — they are attempting to instill it back into the paradigm — to gently meander it towards a rhapsody, instead of the present cacophony that it’s clattering around in! This has been a similar algorithm for millenia: The Universe’s Sages, Seers, and Soothsayers neutralizing and transmuting the dankness of the Times. Throughout the years there were the Jewish fiddle players: who with the utmost courage, grit and grace and integrity kept morale up in the ghettos — who made it possible for others to survive and plant trees that would give shade to many forthcoming generations — whether or not they themselves might’ve actually sat underneath them. There were the fearless young people protesting the atrocities of the Vietnam war as ‘Fortunate Son’ and ‘Gimme Shelter’ was playing in every background — they were joining hands and minds to end Draconian-esque bloodshed — chanting “Hare Krishna” to lighten up the voids in the hearts of the ignorant and blind — while they themselves were ascending octave after octave up the endless Totem-pole of “Aum Mani Padme Hum”. There were the gallant Blues Gods — willing to sell-off their very Soul on the fabled Crossroads — purely to acquire the ability to be able to properly speak the truth for their oppressed Brothers and Sisters — preventing future progeny from experiencing the unspeakable horrors that they themselves had. There were the Troubadours of the trenches of Trenchtown: who were able to harmonize their genius and bring some of Zion back to their Homeland, to their “Xaymaca”, to the “Land of wood and water” where Paradise was briefly misplaced behind a gossamer veil.

To be able to voice one’s truth is courage; to be able to sing one’s truth is magic! The decades have passed and they have left us with the boundless Wisdom of many-an-OG, the likes of Bob Marley, Lee Scratch Perry, Al Barry, Desmond Dekker, Jimmy Cliff, Burning Spear, Bunny Wailer, Peter Tosh, Toots and the Maytals, and many others. To have been able to not let Paradise fall into the grime of the times was what made a ‘Soul Rebel’!

…this is where we are now!

Mr. Marley and the Wailers knew that, “if you are a big tree we are the small axe…ready to cut you down (well sharp)…to cut you down!”

…But, what are we cutting!?

A Righteous Rhythm Towards The End

Yeah, we find ourselves now in 2020, quite a s*it-show, ey!? What are we doing about it!? Are we wallowing in the murk and the mire whilst warbling around with marbles in our mouths? Or, are we continuing our Ancestral Bushido, our codes of honor and morals, our songs of survival, triumph, and evolution! A sword is most frightful at the moment it pings…what’s a “ping”? It’s sound; it’s all sound! When the sounds are frightful and menacing — the vibes are dissonant! When a sound is melodic, from the Heart, and sung in skill and appropriate set and setting — the vibe resonates with Edens above those where we may find ourselves in nowadays — steadfastly raising us closer up towards those more appropriate frequencies.

So what is the Bushido of OG Reggae? I think you know by now! Sing us through the tumult, you Samurai, you! Sing us back to Babylon!

“Many roads lead to the path, but basically there are only two: reason and practice.” 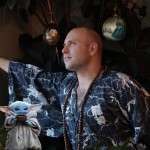 “Trying to define yourself is like trying to bite your own teeth!” ~Alan Watts

Andre (Drey) Zemnovich has been chasing the ecstasy-saturated essences of Reggae, Rap, R&B, and Rock & Roll since he first could swivel his hips like Elvis. Born and raised in NYC, Drey prided himself on never settling down into one particular crew or style: from the “Ravers to the seer of visions; to the painters, the pipers, the prisoners, and the shiners”, Drey always had an eye for seeing the brilliance in the nuanced hues of every facet of the great creative mosaic. “Visionaries find beauty in flaws; idiots find flaws in beauties!” is a quote from one of Drey’s novel’s which best encapsulates his weltenschauung (worldview). With a day job being a successful fitness trainer and coach, with an emphasis on studying and instructing to his students Zen, Peaceful Martial Arts, and Mind-Body-Connection, Drey is one of the vanguards in trying to amalgamate myriad Plant Medicines, particularly Cannabis with the fitness industry. Drey has worked as a journalist for a Cannabis-music publication, assistant editor of a fashion/lifestyle publication, and is a published author, with his personal writings dealing with Shamanism, Consciousness-expansion, psychedelia, and the quintessential Rock n’ Roll vibes! Drey is co-host of the newly launched podcast/interview show titled: Working Title Radio and plans to open-up a Cannabis-gym called High∞Chi Fitness in NYC in 2021.

“Love is of all passions the strongest, for it attacks simultaneously the head, the heart and the senses.” ~Lao Tzu