In last week’s piece, I wrote briefly about Side Door, an event organization company that self-describes as “Tinder for musicians”. In its inception, Dan Mangan (Indie Musician) and Laura Simpson (CEO) made a platform introducing house/smaller venue owners to musicians. This platform served as a hub for both bookers and talent to find each other. Side Door would handle the tickets, complex musician/venue splits, as well as PRO (performance rights organization) fees.

Soon after starting, Side Door moved into organizing shows with Zoom in mind. The platform functions similar to how it worked before. People who want to view the shows can buy tickets, and artists will receive the money after the show takes place. I had the pleasure of hosting a show on Side Door and I will write about it next week. During the show I was lucky enough to get into contact with Dan Mangan, and we spoke about Side Door.

The transition from tour to quarantine was hard for us all. Yet on the first day with a cancelled show, Dan was proactive and used an already booked venue to create a  #ShowToNobody. After the surprising response to the YouTube premiere of this show, he decided to look into Zoom shows using Side Door. He has found, not only do people want to stay at the shows the whole time, but that people from all around the world would tune in. They even enjoyed the shows more than traditional live shows, as they controlled their comfort level. It provides entertainment for the people and an audience for the musician. These are things each lacked in the early days of quarantine.

When asked how Side Door was being used, his response was all about community. The communities built with these Zoom shows have impressed all the musicians involved. This has led to many viewers attending multiple concerts. “Now, a fan in Estonia can go from waiting for me to tour there, seeing 3 shows just in the past few months,” Dan said. The fostered community becomes a new cult following. These shows allow for such a personal feeling that these new shows can still be expected even post-pandemic.

The Future of Side Door

When asked what the longer term plan was, an idea was mentioned of “hybrid shows.” A venue could sell a certain amount of in-person tickets and up to around 1000 more online tickets. This is the method many stand-up comedians are choosing, many already using Side Door to do so. With the smaller in person audience, the performer still gets the applause, and the comedian still gets the laughs. All the while, the public is safe and the musicians can still make money. This system will certainly be helpful for venues who can only operate at low capacities. This would substitute for the lost money coming from in-person sales of merch, food, and booze.

Side Door is an avenue for artists to continue creating and working and folks at home to enjoy the communities that are built from it.

In the end, when asked for any advice for musicians starting now, he spoke about building a community, and fostering it. Join up with other bands to put on a show (like I did), make sure to stay in touch with anyone who has ever seen you and enjoyed it, and ensure quality over quantity. “A Zoom show to 45 people will do more favors to you than a YouTube video with 600 views on it.” Make sure the experience had by viewers is tangible. These shows should be looked at by anyone who is missing shows, artist or art lover. 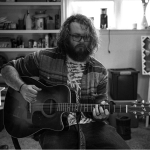