Tidel Volume and Apex Shrine took the stage getting the crowd inside of Fox Sports Midwest Live! ready for Grandson. With an early 2000s rock, alternative sound Tidel Volume knew how to rock the stage for everyone to have a great time. Each song has a groovy bassline and chord progression that made it hard not to tap your foot to.

Generally seeing any concert live will get you motivated to get outside of the house, however, seeing Grandson live will get you wanted to buy tickets for every show that comes through town. Now, if you aren’t 100% sure about going to see him live at one of his concerts, just go because you will thank me later!

As Jordan Benjamin, Grandson, took the stage, the crowd started to get closer towards to stage everyone shoulder to shoulder. No time was waster as their feet touched the stage playing from their latest EP, starting off with ‘Stigmata’. Throughout the entire show, Benjamin encouraged everyone in the gathering to make the slightest change in the world from helping those vote in politics to listening to what is happening around the world, as the smallest thing can make a difference. The was closed with Blood//Water that helped put him on the music map as it made its rounds around radio waves across the country in 2018.

If you are needing new music to listen then take a listen to his newest single “Dirty” that was released on September 23, 2020. His debut album will be released at the end of 2020, giving us the gift we all needed.

Need to see more photographs and event recap from a Grandson concert? Take a look at the time he played in Music City, Nashville, Tennessee at The Basement East. 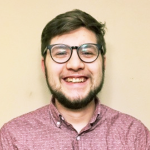 5 years of experience in graphic design, concert and lifestyle photography.