Who doesn�t love a good redemption story?  Count me among the millions glued to my TV this past weekend to see Tiger Woods recapture his greatness on the golf course at the Masters once again.

A new breed of I Prevail

When I first heard I Prevail in 2016 after the release of Lifelines, their debut full length album, I was largely unimpressed. I heard a band that had potential, but who sounded like they had settled for making �just another post-hardcore/metalcore album�. There was nothing overly remarkable about it. The composition, songwriting, and musicianship felt simple, generic, and sounded like something I had already heard hundreds of times before. I got bored with it pretty quickly, and even found myself changing the station whenever their singles were played on Octane, Sirius/XM�s prominent rock music channel.

I was in no real rush to check out Trauma– the band�s second full length record on Fearless Records. In the past, I had already written the suburban Detroit natives off, like many sports fans and casual observers had written Tiger Woods off- especially after vocalist Brian Berkheiser�s future with the band was in doubt after developing a polyp on his vocal cord that has to be surgically removed in late 2017. But much like Tiger silenced his critics and had the sports world celebrating, I Prevail put forth an effort with this album that had me standing and applauding by the time it was done as well.

And so I put on the headphones…

It only took about 30 seconds into the opening track and first single �Bow Down� to realize that this band had grown some serious teeth since the last time I had checked in on them! Not only is the aggression turned up to 11 both vocally and musically, but the production quality is lacking nothing! This was as FULL a rock song as I�ve heard recently.  There are some beautiful breakdowns in this track also, both high energy and a softer, reserved breakdown as well.  It�s a wonderfully composed track, and is definitely my favorite song on the album. If you work out, prepare to have this one on repeat! �Paranoid�, the second track on the record, introduces elements of trap music and rap core into this album, and it works! This song is a fresh rendition of a part of rock music that has been left behind but is still stirring to the emotions when done right.

�Every Time You Leave� features up and coming EDM voice Delaney Jane trading vocals with Brian Burkheiser. The track is reminiscent of some of the older I Prevail stuff, but has a much more mature feel to it.  She is a beautiful voice that fits the song well.  �Rise Above It� features budding independent hip-hop artist Justin Stone, and this track shows you that the band has truly made the album they wanted to, incorporating trap, hip-hop, and even elements of EDM (yes, that WAS dubstep you heard in there).

�Breaking Down� is the second single from the album, and has more of a mellow vibe than what you�d expect from an I Prevail single. It�s very heavy on the bass in the verses as they continue to prove that there is a place for trap in metal, but it is still thick and heavy in the chorus as we�ve come to expect. And as we have seen more frequently in recent times, it�s good to see another band tackle the once taboo subject of mental illness, as they do in this track.

�DOA� blends aggressive rap verses, screams, and solid vocal melodies in a driving track that keeps everyone�s heads bobbing up and down to the beat. �Gasoline� rivals �Bow Down� in aggression and angst and is another intensely heavy metal jam that may lead to items being smashed and destroyed in your general vicinity, or new personal bests in the weightlifting sessions at the gym if you happen to have this track playing in your earbuds!

�Hurricane�, the eighth track on the record, takes the listener in a total different direction after the carnage of �Gasoline�. With an EDM style intro with vocal melodies that seem to indicate that they are tapping into their softer side. As the song goes on, the intensity rises on this track, and Eric Vanlerberghe�s screams take over as it transforms to a full on heavy rock track. This kind of creativity is par for this album, and is one of the things I respect so much about it.

�Let Me Be Sad� is a welcome rock ballad at this point on the album, as they�ve covered so many other bases along the way. It is an emotional track and delivers in the vocal melodies as well as the well-crafted rap verses. �Low� is an upbeat, energetic rock jam that is lyrically introspective, relatable, and easy to connect with. It�s a good track that may need a few times on repeat, since it comes in at under 3 minutes (2:45 to be exact). �Goodbye� brings the trap elements back around one more time in a sub-2 minute interlude (1:43) that forges ahead towards the album�s conclusion.

�Deadweight� pulls no punches and is a balls to the wall metal track that stands tall among anything else coming out of the scene today. Despite the successful experimentation on this record, on this track, I Prevail still makes sure to let everyone know one more time on this album that they can absolutely bring it! Trauma concludes with �I don�t Belong Here�, an emotional acoustic ballad that is a gentle ending to the wild and thrilling experience that listening to this album creates.

In my eyes, this band has grown leaps and bounds from Lifelines to Trauma. This is one of my favorite albums of 2019 so far, and the chances they took on this record and the way they executed on everything they wanted to create on this record tells me that I was right to think that there was more in the tank then what we saw back in 2016. This was a band I was ready to ignore, and who faced an uncertain future even before making this record, but this is now a band I am all-in on!

Like Tiger on a Sunday, rocking the red and black. 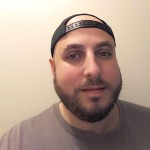