After moving to Nashville in 2019 Cleveland native and Envoi frontwoman Madeline Finn is making waves with her latest single release When it’s Dark.

The single relentlessly pursues the reality of growing in self-friendship and self-awareness and opens with the simple-but-haunting question, “Tell me what am I so afraid of?” Finn masterfully weaves feelings of fear and uncertainty into her lyrics, blending genres such as folk, acoustic indie, and southern rock while aching guitars and crashing percussion cry the emotional experience of anxiety’s battle.

Finn stated that the inspiration for the song occurred when, “I was having a panic attack where I felt like I was being watched like a weird, crazy, anxious person, and a lot of the coping mechanisms I learned in therapy weren’t working. I decided it might be a good idea to pick up my guitar, and twenty minutes later the song came to be.” The full song was finalized later at Colerain Mansion in Pennsylvania while Finn was recording her previous EP.

Whether you’re already a fan of Madeline or are discovering her music for the first time, she is excited to let everyone know that another new single titled Neat will be hitting the music world on August seventh, and a full album is set to drop sometime at the end of August. The full album will include When it’s Dark as well as previous singles from this year.

If you (like myself) absolutely need more music right now, you’ll also be happy to know that Finn has spent most of her COVID-19 summer, “…continuing to do socially distant shows, but really trying to pivot to something genuine using technology to release content that connects with fans and still makes my heart feel good. Really trying to continue engaging with fans meaningfully.”

When it’s Dark is currently available on all major music platforms. You can keep in touch with Finn, her live streams, and her socially distant shows through Instagram, Twitter, Facebook, Patreon, and her personal website. 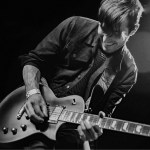