NASHVILLE ROCK N POD PRE-PARTY SHOW The third annual Nashville Rock N Pod Expo opened with a bang Friday night at the pre-party as the newly re-branded band Lipstick Generation took the stage. Clad in black and leather, the band opened with a Kiss cover followed by numerous songs from their heavier first album, as well as a song from their lighter second one.

Lead singer Greg Troyan commanded the stage with his usual energetic presence as he ran, jumped, and dropped to his knees to bring the rock and roll noise. Bassist Stephen Smith entertained with his usual wireless set up as he ventured out into the crowd of excited rock fans. Solos by guitarist Spencer Woodley and drummer Cody Bottoms continued to rev up the growing crowd.

In the second spot of the night was Cookeville, TN based rock group Eightball. The black leather fashion continued with lead singer David Bush and bassist Val Batts failing to disappoint. Eightball?s set started heavy with ?Time Will Tell? and continued with slightly lighter tunes, including a ballad during which Bush handed out free CDs to whatever lucky fans happened to be closest to the stage. Inspiring attendees to continue to follow their heart and passion, Bush shared the story of how he had been told he was too old to rock and how only you get to decide when you?re done, followed by ?Never Too Old.? A salute to the military and veterans and a few more rockin selections, and Eightball thanked Nashville for their hospitality and made the way for headliners Thee Rock N Roll Residency.

Thee Rock N Roll Residency started five years ago and consists of local musicians gone big time Jeremy Asbrock, Phil Shouse, and Ryan Cook on guitars and vocals, bassist and vocalist Judd Fuller, and Paul Simmons on drums. Through the years, Thee Residency?s answer to augmenting Nashville?s rock scene has resulted in many special guests including local favorites as well as bigger name rock legends jumping in to jam after their Nashville tour stops. For this show, the party started with the core crew doing ?One Way to Rock,? followed by ?Long Live Rock,? and ?Godzilla.? The set was filled with shredding solos early on from all members, as they played off of each other and offered their usual comedy anecdotes to keep the crowd (and themselves) amused. Crowd headbanging had already commenced when the special guests took the stage. Appearances by Ricky Dover Jr., Tony Harnell, Brian Forsythe, Michael Sweet, and Jack Gibson gave the crowd even more of what they love. Nashville?s rock crowd and tightly knit community was as supportive and welcoming as ever as an
atmosphere of true camaraderie was displayed for the over fifty percent of expo attendees that hailed from somewhere other than Nashville. 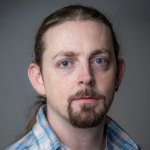